I love showing, rebuilding and talking about antique tractors! I hope you enjoy these pictures!
Please email me with any questions, comments or pictures! Click here to email Joel! 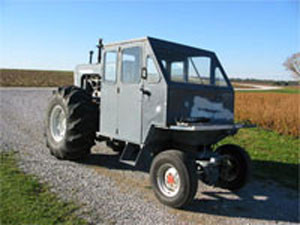 All through the history of tractors, the main question would be, “How much can it pull or What can it pull”. I guess with horses it may have been – how easy does it pull. In NE that question had to be answered before a tractor could be sold in the state. Also answered were many other questions when the tractor was tested at Lincoln, NE , test track. This being fuel economy and if there were any problems during testing. These tests became the basis for model comparisons of all the tractors being made to this day.

Oliver Tractor Corp. had a little closer relationship with the NE test facility because they were the 1 st to make 6 cylinder motors which made great loading units during testing. The loading unit would be a tractor or maybe just the engine, transmissions and rear end in trailer configuration that had been modified to create a load when pulled, the engine in the load unit would be modified by removing the piston rings and installing rubber o-rings to cut down on friction and make a tighter seal. There would be a restriction in the exhaust, (like an engine brake) to make the motor hard to turn. The transmission could be modified to spin the motor fast even at slow speeds. The size of the tractor being testing would determine how many load units would be needed to load the tractor being tested. 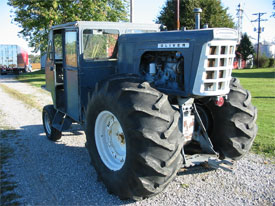 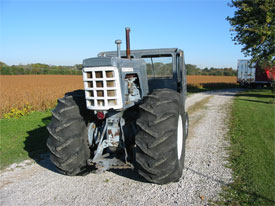 Now this close relationship came in handy during WWII when the tractor tests were put on hold. Mr. Charlie Adams decided to leave the test center and he came to work for the Oliver Tractor Corporation. At this time, it was decided that Oliver would build their own test car unit. Now Oliver was already selling their power pack units to other equipment manufacturers. These units consisted of the engine, transmission, and rear end, and could be put on other equipment to provide the power to operate it. The oddest of these was a heavy built industrial unit that was the power for a grader. The unit was called a 50 and 500 E.O.A. (engine over axle). It was consisted of a rearend with a four speed transmission. The transmission looks to be a 900 industrial tractor model. The engine sat backwards over the rear end. The radiator was at the back and the clutch was at the front. A drop box with a high and low range gear set dropped the power down to the front of the transmission. The transmission and hi-lo were both controlled inside the cab. Now for the odd part, the rear end ratio is so fast that it cannot even pull itself around in the high side of the drop box. This will be addressed later.

The transmission housing on the test car has the casting #XA785. This indicates an experimental casting. If this housing had gone into production, the X would have been replaced with a 1 and the parts book would show a part #1A 785. Since this is not the case, this has to be considered a casting that never went into production. The test car also has the number EX8351 stamped on the front-end support. This could indicate an experimental number assigned to this unit while testing was conducted on the rear-end before it became a test car. No history has been found in the factory records as of this writing. Now, we will move to the cab.

The cab is set up with a full bench seat. While not likely to have been needed for three people this unit did require two people to operate it when testing tractors. The steering and small dash came from different production tractors. The cab does not have A.C. or a heater; not even a fan! The big dash across the cab contains some guages and counters. The counters checked that both axles were turning the same speed or revolutions. The big guages read pressure from the cylinder that was used between the test unit and the tractor.

Now, the cylinder was the measuring device of the test unit. It was of a frictionless design. It was machined as close as possible and used no o-rings on the piston or rod, as they would cause friction. A catch can of sorts was used to catch the oil that would leak out of the cylinder. When the testing was to begin, a cylinder (there were 3 different sizes depending on the tractor being tested) was attached between the tractor and the test unit. Some chain would also be used to give a safe distance between the units. To begin the test, the cylinder would be filled with oil from a reservoir on the test unit. The pressure was built by a small hydraulic pump shaft driven by an electric starter, the pressure would close the cylinder between the units and the testing would begin. As you might have figured out by now, the guages would read the pressure that was generated by the cylinder being pulled on to try and open it. There is also an electrical transducer in the line to get the closest possible pressure reading.

In the beginning the test unit could also be used to create load on the test tractor. This was done by picking a gear in the drop box and transmission to spin the engine very fast. The gas pedal would be locked in the wide-open position to hold the carburetor butterfly open. The gas to the carburetor would be shut off and the ignition turned off. A tachometer would show r.p.m.’s to 2500 and the governor would still shut the butterfly if the engine was to overspeed. This would kill the air to the engine when it was trying to pump the air out against the exhaust restricter. Now the test unit could test very small tractors on its own, but required the load units to test larger tractors. The more horsepower a tractor had, the more load units would be needed. As tractors got bigger and more powerful, it was decided that the test unit would not be used any longer for the loading. This made the driver’s job a little easier as his hands were full just driving straight behind the tractor, being tested.

This test unit has seen a lot of tractors over the years as it was used all the way through and to the end of Oliver’s and White Farm Equipment’s tractor production. The unit also received some updates in sheet metal, front axles and the additions of power steering. The hydraulic drum brakes from the 900 Industrial tractor never seemed to work that good, though.

After Agco stepped onto the scene the test unit took a long road trip from Charles City, IA, to Coldwater, OH. Not much was known about what the test unit did until I talked with a gentleman at the Cross Roads of Dixie Antique Show in August, 2004. I was at this show being interviewed by Max Armstrong from the U.S. Farm Report. After the interview, a man said he remembered seeing the test unit at Coldwater, OH, in the 80’s when he went to see a new mower conditioner that New Idea was coming out with. The test unit was pulling the mower conditioner in the raised operating position and was driving around a concrete test truck with a rumble strip. The test unit would run beside the strip and pull the mower conditioner across the bumps to see how it held-up. While not very exciting, I guess it was being useful to the Agco Corp.

Now as the years went by the test unit took an even longer road trip all the way to Hesston, KS. I know nothing of it’s work at Agco’s Hesston Plant except it was finally sold to a salvage dealer to make room in a warehouse. The salvage man thought better of parting it out and sold it to an Oliver tractor collector in KS. Some years later he decided to sell it and I became the new owner.

The unit came once again across the Mississippi River to rest in KY. I received a lot of help from Ollie Schaefer ; he got me in contact with Oliver personnel from Charles City to help me figure this thing out. I was able to talk to the late Kenneth Jacobson whom spent many hours on the test unit and went to all the Lincoln, NE tractor tests during the 50’s & 60’s, where he was the driver of the tractor during the test.

Kenneth’s health and hearing damage kept us from talking much, but his wife sent me a letter with a picture of Ken driving the Oliver 990 during test at Lincoln, NE. This tractor was weighing 19,500 lbs. and was able to pull its own weight for short periods of time.

After Ken’s passing I started talking with his brother, Glen “Jake” Jacobson, who was also an Oliver employee. He was able to locate Mr. Ivin Anderson that gave me some of the best details of the historic machine.

The first show I went to with the test unit was the Cross Roads of Dixie Show in Lawrenceburg, TN, in 2003. I met Jim Haugher from Huntsville, AL, who helped me alot with the operation of the test unit. The ironic thing is that he was working for Minneapolis Moline when White Farm Equipment purchased the company and combined it with the Oliver Corporation. His job was in the tractor testing department and he was familiar with the operation of the load units and how they operated. He came to the South when Minneapolis Moline tractor plant was closed.

Jim described what Minneapolis Moline did to get ready for a tractor test at Lincoln, NE.

A tractor would be picked off the assembly line and then it was taken back apart. The transmission and rear end would be set-up and run inside and all bearing loads checked for the least power loss through the rear-end. The engine would be run in and tuned to the maximum factory settings. After these run ins, the complete tractor would be run to check all performance factors. Then time would be spent getting the tires “broke in”.

The test lab had tread wear standards on the tractor tires used on the concrete test truck. This explains the term road-wear! A new tire just did not work as good as a slightly run tire.

Now, besides going to some antique shows, the test car spent some time in it’s old home town. The Floyd Co. Museum extended an invitation to display the test car in it’s original condition. In March 2005, the test car went on display until August 2005. It was featured in the museum newsletter and drew a lot questions while on display. I hope I covered the history and operation of this test unit so that you can explain it to that person who doesn’t like to read but always asked “What does that do?”. If anyone has any history they would like to add, please call, write or e-mail.

Here are some links to websites that I enjoy and I feel you will too!

Home of the Muscle Tractors.
www.heritageiron.com

The official site of the United States Antique Pullers.
www.usapuller.com